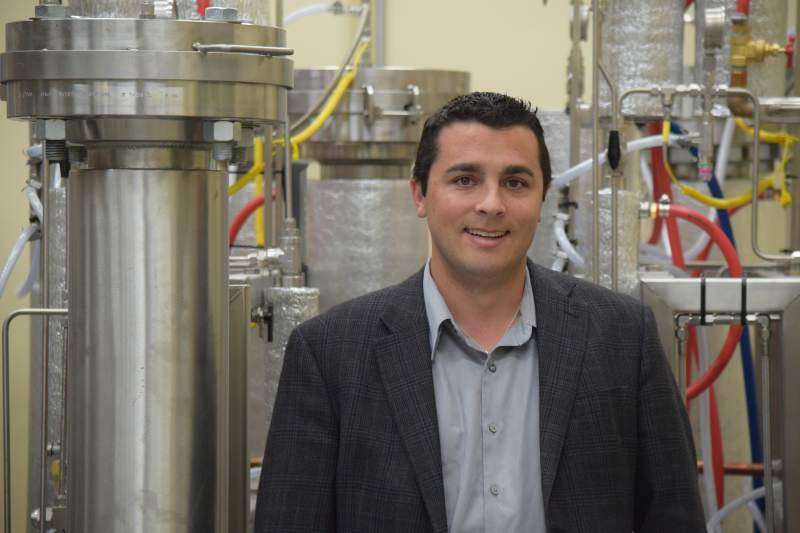 Glaciers carve valleys out of rock in more than 10,000 years. Santa Rosa created the first outlines of CannaCom Valley in the past year, with some two dozen cannabis-commerce startups already shaping the valley floor (see chart in article).

CannaCom Valley, expected to quickly attract thick growth of new business enterprise, will become a verdant source of city revenue if voters say yes to a new tax measure in June. The cannabis industry will rival wine and beer, soaring to hundreds of millions of dollars of business.

This is Sonoma County’s second major business boom in 25 years. In the 1990s, Petaluma saw Telecom Valley reshape its terrain with huge new business parks especially in the city’s northeast quadrant. Telecom Valley in Petaluma ranked No. 2 after Dallas in the United States in terms of telecommunications technology heft. Big players included Advanced Fibre Communications, co-founded in 1992 by Don Green and bought by Tellabs in 2004; DSC Communications, acquired by Alcatel; and Cerent, purchased by Cisco in 1999 for $6.9 billion. Telecom Valley crumbled into a ghost town when the dot.com bust descended in 2000.

CannaCom Valley will reconfigure business parks, feed attorneys, architects, engineers and contractors, and affect nearby residents in Santa Rosa. So far the biggest proposed project is from Giffen Avenue Property, owned by people involved in the existing CannaCraft business located on Circadian Way about a mile away.

The deed on the 12-acre property with five buildings, sold last year for $6.3 million, showed managing members Dennis Franklin Hunter along with Fussell, who co-founded Emerald Pharms dispensary in Hopland. Hunter and Fussell are Giffen’s co-CEOs, according to Caston. Both members started growing medical cannabis many years ago after it became legal in California in 1996, he said.

Hunter was arrested, jailed for a day and released without charges in 2016. Police seized extraction machines, cash and other property from CannaCraft. A few months later, Santa Rosa approved the business for manufacture of cannabis medical products. Hunter is also CEO of Santa Rosa Tropicals, fern wholesaler, on Occidental Road in Santa Rosa, according to state records.

Some neighbors oppose the project. On March 10, attorney Richard Lloyd Cooper wrote to the city to object to the “proposed commercial growth of marijuana adjacent to my home. My primary objection is against the odor-smell that the plants create,” Cooper said. “The smell is skunk-like or sewer-like.”

Cooper went on: “Do city officials realize the loss of value my property suffers because of this odor and the fact that I must disclose this condition before any future sale of property can occur?”

Neighbor Bianca Blengino wrote to the city on March 9. She lives 1.7 miles from the project. “I have concerns about children being exposed to smells emanating from the growing operations,” Blengino wrote, noting the Robert L. Stevens School about half a mile away. “Don’t students deserve clean air?”

Blengino expressed concerns about jobs. “While the industry does add jobs, they are low-paying and mostly part-time,” she said. “While I applaud the decision of the city and county to regulate and permit this industry, there is a rush to do so without balancing the city’s needs as a whole.”

On March 21, a minor application for design review on 2739 Giffen Avenue was approved by Santa Rosa’s zoning administrator.

Sister company CannaCraft, a medical-cannabinoid-extraction business, opened on Circadian Way in May 2016. “This facility is the first one permitted,” said Caston, vice president of public affairs and policy for the company, which produces edible cannabis products as well as gel capsules. The company has 168 employees, 140 in Santa Rosa. Its products sell in some 500 dispensaries statewide. A sister company on site, Critical Solutions, manufactures and sells extraction machines for cannabis.

The company applied for permits on another building at 2351 Circadian Way, formerly an Immecor site, for manufacturing, packaging, labeling and processing cannabis — including trimming and grinding — prior to extraction.

Giffen Avenue Property and CannaCraft will be vertically integrated following draft legislation released by Gov. Jerry Brown on April 4 that will smooth out differences between Prop. 64, Adult Use of Marijuana Act, passed in November, and the Medical Cannabis Regulation and Safety Act, enacted in 2015 (now Medical and Adult-use Cannabis Regulation and Safety Act, MACRSA). That bill restricted the number and type of licenses cannabis businesses could acquire, with 17 license classifications in six categories: cultivation, manufacturing, testing, dispensary, distributor and transporter. Proposed legislation allows vertical integration under Prop. 64 guidelines, with only testing licensees kept independent.

“We work with lots of cultivators” under contract, Caston said. The Giffen Avenue site will house some of those contractors. The site will also have edibles manufacturing, as well as distribution and transportation businesses for cannabis products.

The sprawling campus of facilities for medical cannabis is “all-encompassing,” Caston said. “A lot of these buildings have been vacant and blighted for well over five years.” He expects a total of 400 to 500 employees when the build-out is complete.

Cultural stigma against cannabis remains “one of the biggest challenges” for the industry, Caston said. Seniors use Care By Design extracts for pain management. “We offer vehicles that are anonymous,” he said, “a strip that goes under your tongue, a gel cap that looks like a fish-oil pill, modes that combat the stigma.”

CannaCraft cannot ship products across state lines, even neighboring Oregon and Washington, where cannabis for adult use was legalized before California’s Prop. 64. Cannabis remains illegal as a Schedule I drug under the federal Controlled Substances Act of 1970.

CannaCraft, along with its affiliated companies, is the largest locally owned cannabis business in California, according to Caston. A couple of larger national entities seek to enter the California market, he said. If Santa Rosa green-lights CannaCraft and Giffen Avenue proposed projects, the business could more than triple in size.

Santa Rosa received an application for 1809 Empire Industrial Court, located near Piner Road, by A&E Cultivation, based in San Rafael. The application shows Veder El Shawa of San Rafael as representative. The building, purchased by Kirby Hock with ownership transfer on March 25, has nearly 21,000 square feet. The seller was Karen Heintz of Occidental.

A&E Cultivation’s project, much smaller than Giffen Ave., will have three employees. “The security of our location will be our number-one priority,” according to a city summary of the project, which describes dome cameras. “All doors will be equipped with an alarm system,” the report said. “Access points from outside the facility will have both alarms and locks with tamper-proof security devices.” A & E Cultivation will have two levels of carbon-based air filtration using centrifugal fans, the report said, one inside the cultivation room and another outside.

For the adjacent building at 1805 Empire Industrial Court, an application for cannabis cultivation was filed by Middle Relief Partners, represented by attorney Joseph Rogoway and Santa Rosa architect Jim Henderson. The property owner is shown as Sonoma Link, LLC, based in San Francisco. The building has about 9,700 square feet, and the project would have about 4,800 square feet of canopy.

“We would ultimately like to have a dispensary,” said David Page, chief operating officer and managing general partner of Middle Relief, interviewed as he attended the Giants’ opening game on April 10. Middle Relief formed within the past year. The dispensary may sell both medicinal and adult-use cannabis. “We are all waiting to see what Drumpf and Sessions and Dept. of Justice are going to do about that,” Page said.

Middle Relief Partners, an investor group with three partners, plans 10 employees. One of the partners is a retired CPA who will become the company’s chief financial officer and compliance officer. “Our CEO is a banker,” said Page, who declined to give names of the CEO and CFO.

“We closed escrow on Dec. 29,” Page said. The trio paid $1.7 million for the building. “We had to pay cash for it. Because of federal restrictions on a Schedule I drug, you can’t have a mortgage on a building because Fannie Mae and Freddie Mac are federally controlled,” he said.

Cultivation will be overseen by Scott Toland, chief production officer, who worked for Good Chemistry, a Colorado-based cannabis company. Toland “achieved great success growing some of Colorado’s best cannabis,” according to the company. The facility will use charcoal filters to curb odor. Water use is estimated at 2,500 gallons a day.

Toland worked in Denver with some 1,000 lights and three dispensaries, Page said. “He’s a great grower. He also understands compliance issues. We think California will be modeled on Colorado.”

Page had a pre-application meeting with Santa Rosa officials on April 6 to discuss traffic, fire, water, PG&E and building issues. In about a month he will file a conditional-use-permit application. If approved, the project’s internal build-out will take about three months, Page said. The facility could be ready to open by January 2018.

“I worked in the city (San Francisco) and various aspects of the industry for 30 years,” Page said. An electrical engineer is calculating loads needed for grow lights. “We will know that in a couple of weeks.”

He will concentrate Middle Relief cultivation on popular strains. “There’s a new one every week,” Page said. “This week is Skittlz,” which has a fruity aroma and features sativa species in a ratio of 3 to 2 over indica, another species. According to an industry review of Skittlz, the strain offers calming euphoria, relief of mental strain and potent munchies, making it good for illnesses that cause weight loss as well as for treatment of headaches, nausea, inflammation and pain.

“Last month it was Girl Scout Cookies,” Page said, referring to a hybrid between Kush and Durban Poison. The hybrid is noted for high THC levels and treatment of nausea and severe pain. “It’s like golf clubs. You buy a driver and, in six months, it’s a new driver,” he said.

He plans to have the business cross-breed and hybridize to “come up with proprietary strains,” Page said. “You cross Sour Diesel with Lemon Kush and you’ve got Lemon Diesel. Then nobody else has it. We’re still working on trademark and copyrighting. You can’t copyright or trademark something that is illegal. That’s still up in the air like most of it is.”

Next to proposed Middle Relief cultivation is North Bay Bavarian, a specialty BMW service shop opened by Rick Row in 1987. “I won’t make a comment” about the cannabis operation, Row said outside his business. “Maybe I won’t be here.”

Whether or not every neighbor welcomes cannabis enterprise, “it’s a nice fit with Santa Rosa,” Caston said of CannaCom Valley business development. The city’s zoning interpretations “recognized how the cannabis industry is manufacturing, agricultural, lab and transportation. They provided the business certainty that enables growth.” Some manufacturing jobs lost when technology companies downsized their Santa Rosa operations may be replaced, he said.

Santa Rosa, the heart of CannaCom Valley, is “far and away one of the best jurisdictions in the state,” Caston said, “enabling a logical regulatory structure. It makes it much easier for us to do business.”