Move over canned foods and make room for canned pot 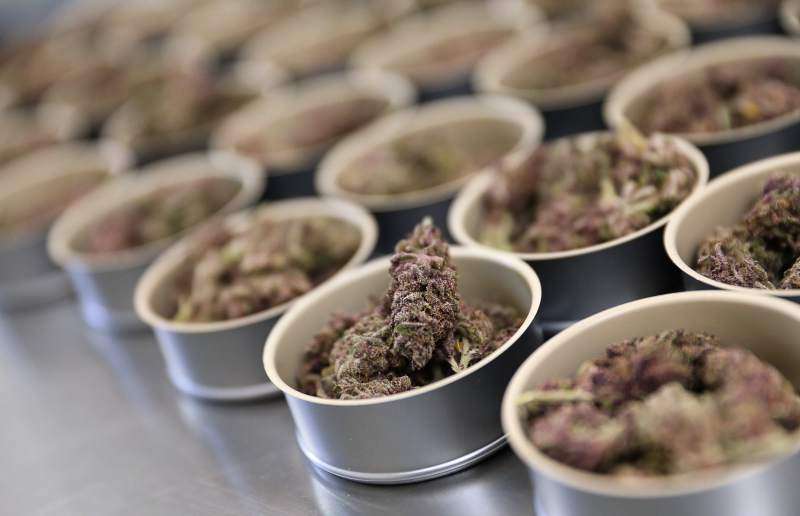 Crack open a can of Coca-Cola, LaCroix or Coors on a hot day. Listen to the pop-hiss and feel the carbonation fizz.

Pull back the tab on a can of CalyxGreen, found on the shelves of Cotati’s medical marijuana dispensary Mercy Wellness, and hear the same pop-crack. A flood of terpenes, which give marijuana’s oils their fragrance, infuses the air.

“Popping the top — then hear the tsssst — and you know you’re the first one in there,” said Ryan Malone, 37, of Santa Rosa, who on Tuesday was buying an eighth of an ounce of Sour Amnesia, packaged in a pull-top can, at the Cotati dispensary.

As the marijuana industry goes through a massive transformation under the weight of new rules drafted by state and local lawmakers, businesses are dealing with a fresh set of demands for quality control and storage.

More than 100 strains of cannabis, sold in hermetically sealed cans, were on the shelves Tuesday at Mercy Wellness. Most of the flowers were grown indoors in Sonoma County by members of the dispensary collective, said Brandon Levine, founder of Mercy Wellness.

State rule-makers writing California’s first comprehensive rules for the marijuana industry have banned canning in the draft rules, language the California Growers Association, Levine and others are pushing to be rewritten. Association executive director Hezekiah Allen said he believes the wording was intended to prohibit cannabis-infused canned foods and should be changed to allow for other types of canning.

“It is important that the regulations distinguish between cannabis-infused canned products and the process of canning,” Allen said.

Canning is a primary strategy for Levine to prepare for the transition period next year when he will have to sell cannabis from licensed producers — with the knowledge that most of the cultivators he works with currently won’t seek licenses or won’t get them right away.

“Licenses are not going to be easy to get,” Levine said.

Behind a series of doors at Levine’s Calyx Green canning facility in Cotati, workers measure one eighth of an ounce of Jah Goo, a purple-hued strain of cannabis developed in Covelo and grown indoors by an outfit called Big Al’s Farm in Sebastopol. The gloved workers packed the buds into small tins about the size of cat food cans and lined them up on tables.

Production manager Kyle Monday then placed the cans on a conveyor belt of a machine built by N2 Packaging Systems, an Arizona-based company. An arm dropped down and poured liquid nitrogen into the cans. The conveyor belt moved the can to the next station where it is hermetically sealed, then down the line where a roller applied the Calyx Green label.

“It stays fresh for at least a year. It doesn’t get smashed, it’s not exposed to light,” Levine said. “The cans are recyclable. Bags are not.”

When exposed to oxygen and ultraviolet light, cannabis’ main compounds THC and CBD begin to degrade, as do its effects, said Samantha Miller, president and chief scientist for Pure Analytics testing laboratory in Santa Rosa.

Baggies, or a turkey bag, keep dried cannabis fresh for one or two weeks before the flavors and smells degrade and the color browns, according to Miller. A glass jar is one step up, particularly if kept in a cool dark place. Nitrogen, an inert gas that replaces oxygen, keeps cannabis fresh between six to nine months, she said.

Marijuana’s effects and characteristics like smell and taste degrade with age and factors like heat, light and humidity.

“People in that business used to rely on folk remedies for cannabis storage — throw a leaf of lettuce or a tortilla, banana peel in the bag,” said Drew Emmer, director of sales and strategic relationships with Minnesota-based Boveda Inc. “People were doing crazy things to mitigate loss due to evaporation.”

Boveda developed a freshness packet for cigars, which the company eventually redesigned for string and reed instruments, which also benefit from humidity controls.

About 10 years ago, the company stared working with cannabis cultivators who found the packets in guitar stores, Emmer said.

“They needed something a little drier for cannabis,” he said.

Fast forward, and California is the company’s “best customer” and Boveda has for several years attended the Emerald Cup cannabis contest in Santa Rosa and is joining the California Growers Association.

Most of the company’s clients are cultivators seeking to keep the dried flower fresh, and Emmer said they have “hundreds” of clients, mostly growers, dispensaries and hydroponic stores, in Sonoma, Mendocino and Humboldt counties.